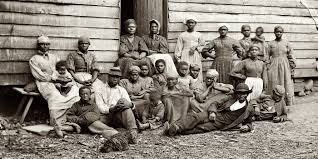 The American Revolution would divide Quakers across the Atlantic. In the United Kingdom, Quakers would be foremost in the Society for Effecting the Abolition of the Slave Trade in 1787 which, with some setbacks, would be responsible for forcing the end of the British slave trade in 1807 and the end of slavery throughout the British Empire by 1838. In the United States, Quakers would be less successful. In many cases, it was easier for Quakers to oppose the slave trade and slave ownership in the abstract than to directly oppose the institution of slavery itself, as it manifested itself in their local communities.

While many individual Quakers spoke out against slavery after United States independence, local Quaker meetings were often divided on how to respond to slavery; outspoken Quaker abolitionists were sometimes sharply criticized by other Quakers.
Nevertheless, there were local successes for Quaker antislavery in the United States during the late eighteenth and early nineteenth century. For example, the Pennsylvania Abolition Society, first founded in 1775, consisted primarily of Quakers; seven of the ten original white members were Quakers and 17 of the 24 who attended the four meetings held by the Society were Quakers. Throughout the nineteenth century, Quakers increasingly became associated with antislavery activism and antislavery literature: not least through the work of abolitionist Quaker poet John Greenleaf Whittier.

Quakers were also prominently involved with the Underground Railroad. For example, Levi Coffin started helping runaway slaves as a child in North Carolina. Later in his life, Coffin moved to the Ohio-Indiana area, where he became known as the President of the Underground Railroad. Elias Hicks penned the ‘Observations on the Slavery of the Africans’ in 1811 (2nd ed. 1814), urging the boycott of the products of slave labor. Many families assisted slaves in their travels through the Underground Railroad. Henry Stubbs and his sons helped runaway slaves get across Indiana. The Bundy family operated a station that transported groups of slaves from Belmont to Salem, Ohio.

Quaker antislavery activism could come at some social cost. In the nineteenth-century United States, some Quakers were persecuted by slave owners and were forced to move to the west of the country in an attempt to avoid persecution. Nevertheless, in the main, Quakers have been noted and, very often, praised for their early and continued antislavery activity.

The deportment of Quakers vis-à-vis slavery in the 19th century can instruct us in facing income inequality in our own time; the anti-slavery movement can serve us as a model for the anti-poverty movement today. The extreme poverty that we find in portions of the U.S. is as great a social disgrace in the wealthiest nation on earth as slavery was in our earlier history. Read on.