New York is a city with some of the worst income inequality in the country. But when it comes to inequality of life spans, it’s one of the best. 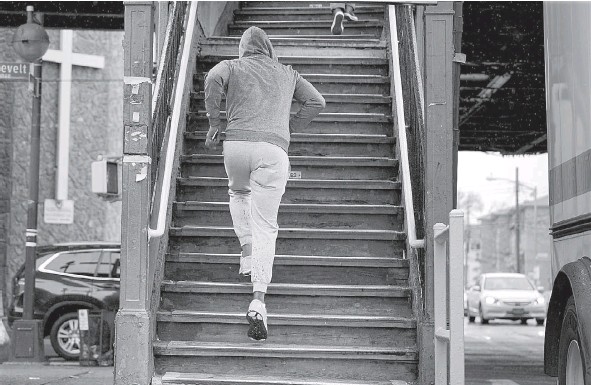 A subway entrance on Roosevelt Avenue in Queens. Exercise, in the form of walking, is built into the lives of many New Yorkers.

Impoverished New Yorkers tend to live far longer than their counterparts in other American cities, according to detailed new research of Social Security and earnings records published Monday in The Journal of the American Medical Association. They still die sooner than their richer neighbors, but the city’s life- expectancy gap was smaller in 2014 than nearly everywhere else, and it has shrunk since 2001 even as gaps grew nationwide.
That trend may appear surprising. New York is one of the country’s most unequal and expensive cities, where the poor struggle to find affordable housing and the money and time to take care of themselves.
But the research found that New York was, in many ways, a model city for factors that seem to predict where poor people live longer. It is a wealthy, highly educated city with a high tax base. The local government spends a lot on social services for low- income residents. It has low rates of smoking, and has many immigrants, who tend to be healthier than native- born Americans.
The research seems to suggest that living in proximity to the preferences — and tax base — of wealthy neighbors may help improve well- being. New York is not just a city of rich and poor, but also one of walkable sidewalks, a trans- fat ban and one of the most aggressive anti- tobacco agendas of any place in the United States.
“Even with income inequality as big as it is, there are things that government can do to help the poor be healthier and live longer lives,” said Dr. Thomas Farley, who was New York’s health commissioner during the Bloomberg administration and now runs Philadelphia’s health department. “It’s about combating the things that are killing people.”
The findings underscore public health research showing that healthy habits matter. The JAMA paper found that several measures of access to medical care had no clear relationship with longevity among the poor. But there were correlations with smoking, exercise and obesity.
“There remains this misconception in our society that health is determined by health care,” said Dr. Steven Woolf, a professor and director of the Center on Society and Health at Virginia Commonwealth University, who wrote an editorial commending the research but offering some methodological criticisms. “Behaviors have a huge influence on health outcomes.”
In New York, public health officials have taken that notion to heart. During the period of the study, New York made health a centerpiece of public policy. Though the Bloomberg administration often faced criticism for “nanny state” programs, it pursued policies to reduce smoking and obesity — crucial risk factors for disease.
State and city laws combine to give the city the second- highest tobacco taxes in the country, after Chicago; a single pack of cigarettes often costs more than $ 12. And New York became one of the first major cities to ban smoking in offices and bars. That change affected the daily lives of the city’s rich professionals, but also of their pinched support staffs. The city’s smoking rate plummeted during the 2000s, as its residents’ life expectancy rose.
The city also imposed novel regulations on restaurants and food, banning trans fats that are associated with heart disease, and requiring chain restaurants to post calorie counts on menus. Efforts to tax or limit soda sales were unsuccessful, but public campaigns to discourage unhealthy eating were widespread.
Earlier research looked more closely at New York’s life expectancy gains and identified similar sources for the good news. A study by city health officials in 2013 credited much of the improvement to reductions in smoking and related heart disease. A study from researchers at the University of Pennsylvania found similar factors but also noted that the city’s high share of immigrants played a role in the city’s wellness.
New York may not be the best place for impoverished children to climb the economic ladder, but it is a place where lower- income residents generally enjoy at least one crucial benefit of wealth — a longer life.
With regard to health, “I think maybe income inequality should not be our primary villain,” said Dr. Ashish Jha, a professor at the Harvard School of Public Health. “We should really be thinking about how do we build up the public health infrastructure.”