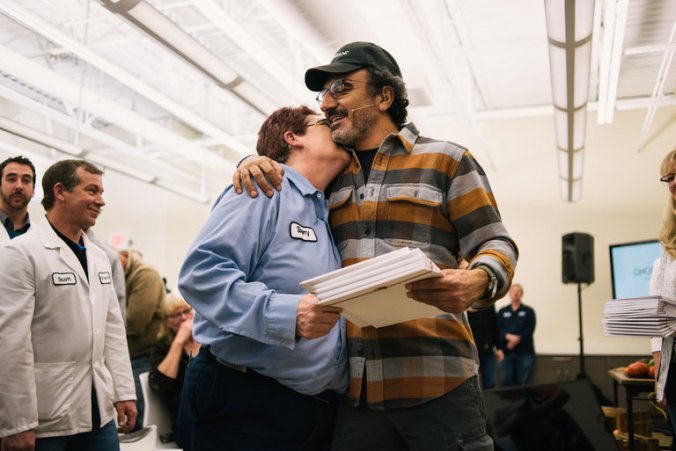 Hamdi Ulukaya, founder of Chobani, handed over to his employees stock worth around 10 percent of the company when it is sold or goes public. (Credit Alexandra Hootnick for The New York Times)

NEW BERLIN, N.Y. — The 2,000 full-time employees of the yogurt company Chobani were handed quite the surprise on Tuesday: an ownership stake that could make some of them millionaires.

Hamdi Ulukaya, the Turkish immigrant who founded Chobani in 2005, told workers at the company’s plant here in upstate New York that he would be giving them shares worth up to 10 percent of the company when it goes public or is sold.

The goal, he said, is to pass along the wealth they have helped build in the decade since the company started. Chobani is now widely considered to be worth several billion dollars.

“I’ve built something I never thought would be such a success, but I cannot think of Chobani being built without all these people,” Mr. Ulukaya said in an interview in his Manhattan office that was granted on the condition that no details of the program would be disclosed before the announcement.

“Now they’ll be working to build the company even more and building their future at the same time,” he said.

Chobani employees received the news on Tuesday morning. Each worker received a white packet; inside was information about how many Chobani shares they were given. The number of shares given to each person is based on tenure, so the longer an employee has been at the company, the bigger the stake.

Two years ago, when Chobani received a loan from TPG Capital, a private equity firm, the company’s value was estimated at $3 billion to $5 billion. At the $3 billion valuation, the average employee payout would be $150,000. The earliest employees, though, will most likely be given many more shares, possibly worth over $1 million.

Rich Lake, lead project manager, was one of the original group of five employees Mr. Ulukaya hired for the plant in New Berlin. Mr. Lake said on Tuesday that he did not expect Chobani shares to change his life much. “I’m not one for living outside my means,” he said.

Rather, he said, the shares are an acknowledgment of what he and the other employees have put into Chobani.

“It’s better than a bonus or a raise,” Mr. Lake said. “It’s the best thing because you’re getting a piece of this thing you helped build.”

“It’s better than a bonus or a raise,” said Rich Lake, an employee at Chobani. “It’s the best thing because you’re getting a piece of this thing you helped build.” Credit Alexandra Hootnick for The New York Times

The transfer of money by Mr. Ulukaya touches on a hot-button economic issue: the rapidly expanding gap in pay between executives and average workers. The United States has one of the widest pay gaps, and the topic has played a prominent role in this year’s presidential race, particularly among the Democrats.

Some other executives have also taken this issue on themselves. A founder of Gravity Payments, a Seattle-based credit-card payment processing firm, last year promised to pay a minimum wage of $70,000 to his 120-person staff within three years.

The shares given to Chobani employees are coming directly from Mr. Ulukaya. The shares can be sold if the company goes public or is bought by another business, neither of which seems imminent. Employees can hang onto the shares if they leave or retire, or the company will buy them back.

The unusual announcement comes before TPG Capital, whose $750 million loan helped bail out Chobani, can buy a stake in the company. Tension between Mr. Ulukaya and TPG about the direction of the company emerged shortly after the loan deal.

TPG has warrants to buy 20 percent or more of Chobani’s shares, depending on targets set in the original deal it struck. But that percentage would now be calculated from the 90 percent of the remaining shares, after the 10 percent given to the employees, essentially diluting TPG’s potential stake.

In addition, a year ago Mr. Ulukaya settled a lawsuit with his ex-wife, who had sought a stake in the company. The terms of the settlement were not released.

This sort of transfer of shares to employees is rare in the food industry. In one of the few notable examples, Bob Moore, the founder of Bob’s Red Mill, a grains and cereals company, handed control of the company to its employees in 2010 with the creation of an employee stock ownership program.

Technology start-ups often pay employees partly in shares to help recruit them or to compete in a company’s early days for in-demand workers. Early employees of Google and Facebook became overnight multimillionaires thanks to such compensation.

But unlike many of those tech companies, Mr. Ulukaya is giving his employees a piece of the company after its value is firmly established.

“It’s very uncommon and rare, especially in this industry, for these kinds of programs to be rolled out,” said Jessica Kennedy, a principal at Mercer, the large human resources consulting firm that worked with Chobani on the new program.

Employees at Chobani’s plant in New Berlin in upstate New York. The company was valued at $3 billion two years ago, which would make the average payout $150,000 in the event of a sale. Credit Alexandra Hootnick for The New York Times

Mr. Ulukaya has played a hands-on role in the company since 2005, when he bought a defunct Kraft yogurt plant here with an $800,000 loan from the Small Business Administration. Two years later, he began selling Greek yogurt, setting off a heated competition in what had been one of the sleepier refrigerated cases in grocery stores.

Chobani pays employees above the minimum wage and offers full-time employees health benefits and other benefits. Early on, Mr. Ulukaya established a 401(k) plan for employees and pushed them to participate.

“I preached and nagged and tried to force them to do it,” he said. “Unfortunately, not all did, and I’ve continued to worry about them in retirement.”

A few years ago, though, the company ran into financial problems after spending almost half a billion dollars to build the largest yogurt processing plant in the world, a one-million-square-foot facility in Idaho. The new plant allowed the company to expand into new products, like a children’s yogurt packed in a tube and tiny cups of dessert-like yogurts.

But the company struggled to get lines up and running smoothly, and public health officials identified mold contamination in some products.

“It was a wake-up call for us,” Mr. Ulukaya said soberly. “It made me realize that I needed to get this right, and so I’m glad it happened.”

The company had to close lines and invest in improving its food safety regimens. It also took the loan from TPG Capital to help build operations better suited to the billion-dollar business Chobani had become.

In a presentation to investors, though, TPG boasted about how it had waited until the last minute to come to Chobani’s rescue with the loan, thus allowing it to negotiate better terms in a deal that it estimated could increase the company’s value to as much as $7 billion. In addition, rumors circulated that TPG wanted to replace Mr. Ulukaya with a new chief executive, which rankled him.

But in the last year or so, business has rebounded, thanks in large part to new products made at the Idaho plant.

Mr. Ulukaya will still own the vast majority of the company, though his portion will be diluted as well. He said that giving his employees a stake in the company’s success was among the terms he demanded when the deal with TPG was struck.

“To me, there are two kinds of people in this world,” he said on Tuesday. “The people who work at Chobani and the people who don’t.” 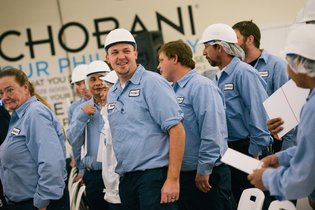 Employees at Chobani’s plant in New Berlin in upstate New York. The company was valued at $3 billion two years ago, which would make the average payout $150,000 in the event of a sale.