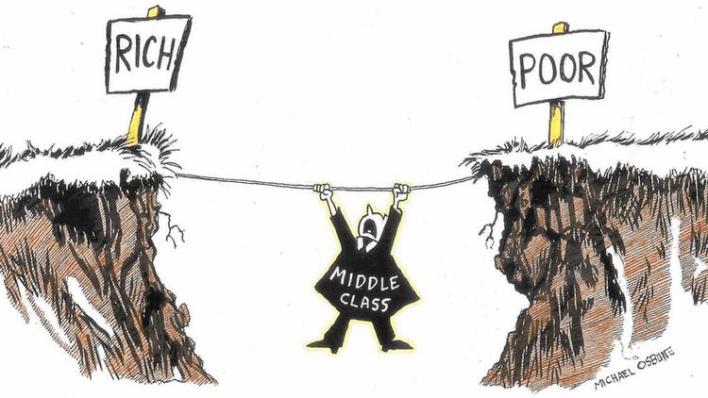 America’s shrinking middle class, a growing concern for the economy and a central issue in the presidential race, cuts across virtually all communities from coast to coast, according to a study released Wednesday.

The report by Pew Research Center found that the share of the middle class fell in 203 of the 229 U.S. metropolitan areas examined from 2000 to 2014, including major cities such as New York, Los Angeles and Chicago, which saw a relatively sharp drop in its middle class.

For many areas, a big culprit in the declining middle was the falloff in manufacturing jobs during that 14-year period, when factories shed about 5 million workers from their payrolls nationally.

“The 10 metropolitan areas with the greatest losses in economic status from 2000 to 2014 have one thing in common — a greater than average reliance on manufacturing,” the Pew report said, referring to places such as Detroit; Rockford, Ill.; Springfield, Ohio; and the Hickory-Lenoir-Morganton area in North Carolina.

The news was not all downcast, especially for metro areas in coastal and border regions that have benefited from the boom in technology, trade and resources.

In California, even as 22 of the 26 metropolitan areas experienced a thinning middle class between 2000 and 2014, most of those same areas saw a net gain in distribution of income, meaning the share of the upper-income tier increased more than the lower-income group.

“It absolutely is an East-West phenomenon,” said Stephen Levy, director of the Center for Continuing Study of the California Economy, noting that coastal areas generally are blessed with higher-wage industries like high-tech, and more favorable demographics, such as a highly educated workforce.

Both the San Francisco and Sacramento areas, for example, showed a significant hollowing of the middle in the Pew study, but Sacramento’s was due largely to more people dropping down to the lower-income tier whereas San Francisco’s reflected sharp increases in households in the higher-income group.

Pew reported late last year that the middle class no longer constituted a majority on a nationwide basis. In 1971, 61% of adults were in middle-income households, but that had fallen steadily to just a hair below 50% last year, Pew said.

Many experts regard a shrinking middle class as worrisome for economic and social stability, and the issue — along with a related trend of skewed gains among the nation’s richest — is seen as a major factor in the anger and resentment displayed by voters during recent primaries that have fueled the campaigns of Donald Trump, the presumptive Republican nominee, and on the Democratic side, Bernie Sanders.

In general, Pew found that areas with a larger middle class tended to have a smaller degree of income inequality.

“The deeper root at what is driving inequality and really hollowing out the middle class — that is a pattern very strong in the metro areas,” said Rakesh Kochhar, associate director of the Pew Research Center. “It is cutting across all communities. No one seems immune to this widening inequality trend.”

As in Pew’s previous study, the latest research defined middle class as households earning two-thirds to twice the national median income, after adjusting for household size. The new report took into account differences in a metro area’s cost of living. So in the Los Angeles-Orange County metro area, a household of three would be considered middle income if its total annual income ranged from $49,011 to $147,036.

For most metro areas, Pew found, the middle class accounted for 50% to 55% of the adult population in 2014, although it was much smaller for big metro areas such as Los Angeles. The share of its middle class in 2014 was 46.5%, little changed from 2000.

The areas in the nation with the largest middle class were mostly in the Midwest, with four of the top 10 in Wisconsin, including Wausau, where 67% of the adults were in middle-income households.

Nationally, a household of three making less than $42,000 in 2014 fell into the lower-income tier, while a household with earnings above $125,000 was considered part of the upper tier.

Midland, Texas, had the largest share of its population in the upper-income tier, at 37%, although the oil-bust in the last two years has likely lowered that figure. Most of the remaining metro areas with the highest share of upper-income adults were in the East, among them Boston, Washington, D.C., and the Bridgeport-Stamford area of Connecticut. The San Jose and San Francisco areas also were in the top 10, with 31% and 28% of their population, respectively, in the upper-income group.

Urban areas in Texas, California and the Southwest dominated the top 10 areas with the highest share of lower-income population. Laredo and Brownsville, both in Texas, topped the list with 47% of their adults in the lower-income group, followed by the Visalia area in California’s San Jaoquin Valley, with 46%.

Among the 229 metro areas, which constitute about 76% of the U.S. population in 2014, there were slightly more areas that saw a bigger increase in the share of upper-income population than lower-income adults. Still, Pew’s Kochhar did not view that as a big win for the American economy. The median incomes of the lower, middle and upper tiers all shrank between 2000 and 2014, he said.

“You can’t say this is a very positive change,” he said. At least in part, he said, “this movement reflects more inequality in income and can be a hindrance to economic growth.”