The following extract from Thomas Piketty’s Capital in the Twenty-First Century serves as an excellent reminder of how far America has moved from a balanced economy following World War II to the highly distorted one of today.

The Transformation of Inequality in the United States

Indeed, let me turn now to the US case, which stands out precisely because it was there that a subclass of “supermanagers” first emerged over the past several decades. . .

I will proceed systematically. First, European inequality was significantly greater than US income inequality at the turn of the twentieth century . . . this does not mean that American society in 1900-1910 embodied the mythical ideal of an egalitarian society of pioneers. In fact, American society was already highly inegalitarian, much more than Europe today, for example. One has only to reread Henry James or note that the dreadful Hockney who sailed in luxury on Titanic in 1912 existed in real life and not just in the imagination of James Cameron to convince oneself that a society of rentiers [1]existed not only in Paris and London but also in turn-of-the-century Boston, New York, and Philadelphia. . .

Income inequality increased quite sharply in the United States during the 1920s, however, peaking on the eve of the 1929 crash with more than 50 percent of national income going to the top decile—a level slightly higher than in Europe at the same time, as a result of the substantial shocks to which European capital had  already been subjected since 1914. . . note the already crucial importance of capital gains in top US incomes during the heady stock market ascent of the 1920s (see Figure 8.5). 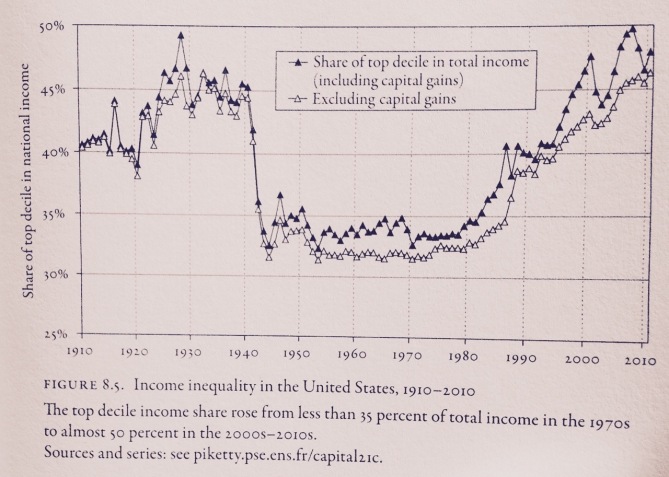 During the Great Depression, which hit the United States particularly hard, and again during World War II, when the nation was fully mobilized behind the war effort (and the effort to end the economic crisis), income inequality was substantially compressed, a compression comparable in some respects to what we observe in Europe in the same period. . . the shocks to US capital were far from negligible; although there was no destruction due to war, the Great Depression was a major shock and was followed by substantial tax shocks imposed by the federal government in the 1930s and 1940s. . .

The Explosion of US Inequality after 1980

Inequality reached its lowest ebb in the United States between 1950 and 1980: the top decile of the income hierarchy claimed 30 to 35 percent of US national income . . . This is what Paul Krugman nostalgically refers to as “the America we love”—the America of his childhood. In the 1960s, the period of the TV series Mad Men . . ., the United States was in fact a more egalitarian society than France . . . at least for those US citizens whose skin was white. . .

Note, moreover, that stock market euphoria and capital gains can account for only part of the structural increase in the top decile’s[2] share over the past thirty or forty years. To be sure, capital gains in the United States reached unprecedented heights during the Internet bubble in 2000 and again in 2007; in both cases, capital gains alone accounted for about five additional points of national income for the upper decile, which is an enormous amount. The previous record, set in 1928 on the eve of the stock market crash, was roughly 3 points of national income. . .

Looking at evolutions without capital gains also allows us to identify the structural character of the increase of inequality in the United States more clearly. In fact, from the late 1970s to 2010, the increase in the upper decile’s share (exclusive of capital gains) appears to have been relatively steady and constant: it passed 35 percent in the 1980s, then 40 percent in the 1990s, and finally 45 percent in the 2000s (see Figure 8.5).  Much more striking is the fact that the level attained in 2010 (with more than 46 percent of national income, exclusive of capital gains, going to the top decile) is already significantly higher than the level attained in 2007, on the eve of the financial crisis. Early data for 2011-20012 suggest that the increase is still continuing.

This is a crucial point: the facts show quite clearly that the financial crisis as such cannot be counted on to put an end to the structural increase of inequality in the United States. To be sure, in the immediate aftermath of a stock market crash, inequality always grows more slowly, just as it always grows more rapidly in a boom. The years 2008-2009, following the collapse of Lehman Brothers, like the yeaers 2001-2002, after th bursting of the first Internet bubble, were not great times for taking profits on the stock market. Indeed, capital gains plummeted in those years. But these short-term movements did not alter the long-run trend, which is governed by other forces . . .

Among the numbers of these upper income groups are US academic economists, many of whom believe that the economy of the United States is working fairly well and, in particular, that it rewards talent and merit accurately and precisely. This is a very comprehensible reaction. But the truth is that the social groups above them did even better: of the 15 additional points of national income going to the top decile, around 11 points, or nearly three-quarters of the total, went to “the 1 percent” (those making more than $325,000 a year in 2010), of which roughly half went to “the 0.1 percent (those making more than $1.5 million a year).

[1] Society of rentiers: a society in which inherited wealth is very important and where the concentration of wealth attains extreme levels . . . This is the pattern we see in Ancien Régime France and in Europe during the Belle Époque . . .