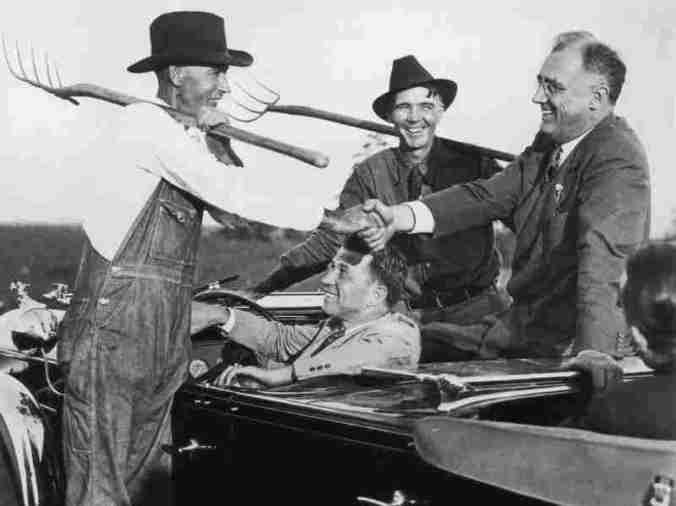 Furthermore, the Great Depression of the 1930s struck the United States with extreme force, and many people blamed the economic and financial elites for having enriched themselves while leading the country to ruin. (Bear in mind that the share of top incomes in the US national income peaked in the late 1920s, largely due to enormous capital gains on stocks.) Roosevelt came to power in 1933, when the crisis was already three years old and one-quarter of the country was unemployed. He immediately decided on a sharp increase in the top income tax rate, which had been decreased to 25 percent in the late 1920s and again under Hoover’s disastrous presidency. The top rate rose to 63 percent in 1933 and then to 79 percent in 1937, surpassing the previous record of 1919. In 1942 the Victory Tax Act raised the top rate to 88 percent, and in i944 it went up again to 94 percent, due to various surtaxes. The top rate then stabilized at around 90 percent until the mid-1960s, but then it fell to 70 percent in the early 1980s. All told, over the period 1932-1980, nearly half a century, the federal income tax rate in the United States averaged 81 percent.

The Anglo-Saxon attraction to progressive taxation became even clearer when we look at the estate tax. In the United States, the top estate tax remained between 70 to 80 percent from the 1930s to the 1980s, while in France and Germany the top rate never exceeded 30-40 percent except for the years 1946-1949 in Germany (see Figure 14.2).

The only country to match or surpass peak US estate rates was Britain. The rates applicable to the highest British incomes as well as estates in the 1940s was 98 percent, a peak attained in the 1970s—an absolute historical record. Note, too, that both countries distinguished between “earned income,” that is, income from labor (including both wages and nonwage compensation) and “unearned income,” meaning capital income (rent, interests, dividends, etc.). The top rates indicated indicated in Figure 14.1 for the United States and Britain applied to unearned income. At times, the top rate on earned income was slightly lower, especially in the 1970s. This distinction is interesting, because it is a translation into fiscal terms of the suspicion that surrounded very high incomes: all excessively high incomes were suspect, but unearned incomes were more suspect than earned incomes. The contrast between attitudes then and now, with capital income treated more favorably today than labor income treated more favorably today than labor income in many countries, especially in Europe, is striking. Note, too, that although the threshold for application of the to rates has varied over time, it has always been extremely high: expressed in terms of average income in the decade 2000-2010, the threshold has generally ranged between 500,000 and 1 million euros. In terms of today’s income distribution, the top rate would therefore apply to less than 1 percent of the population (generally somewhere between 0.1 and 0.5 percent).

Highclere Castle, Hampshire, England, traditional  country seat of the Earl of Carnarvon, was designed in the 19th century by Sir Charles Barry, architect of the Houses of Parliament, in the Jacobean Revival style. It sits in a 1000 acre park  designed a century earlier by Capability Brown, England’s foremost landscape designer. Today the Earl and his family live in “a modest cottage on the grounds,” no longer able to afford the upkeep of such a magnificent domicile.

The urge to tax unearned income more heavily than earned income reflects an attitude that is also consistent with a steeply progressive inheritance tax. The British case is particularly interesting in the long-run perspective. Britain was the country with highest concentration of wealth in the nineteenth and twentieth centuries. The shocks (destruction, expropriation) endured by large fortunes fell less heavily there than on the continent, yet Britain chose to impose its own fiscal shock—less violent than war but nonetheless significant: the top range ranged from 70 to 80 percent or more throughout the period 1940-1980. No other country devoted more thought to the taxation of inheritance in the twentieth century, especially between the two wars. In November 1938, Josiah Wedgewood, in the preface to a new edition of his classic 1929 book on inheritance, agreed with his compatriot Bertrand Russell that the “plutodemocracies” and their hereditary elites had failed to stem the tides of fascism. He was convinced that “political democracies that do not democratize their economic systems are inherently unstable.” In his eyes, a steeply progressive inheritance tax was the main tool for achieving the economic democratization that he believed to be necessary.