Well, we learned a new word this week–“clawback.” John Stumpf, the CEO of Wells Fargo, was required by his bank board to give back the $41 million they had awarded him, plus his bonus, for having allowed or, more likely, encouraged 5300 of his employees ($12/hour tellers) to cheat their customers. This is a clawback.

What is surprising about this story is not that an executive was caught in an illegal activity, because this is quite common; they do it all the time. What is surprising is that he was required to pay for it; this is rare.

By ERIK HOLM AND EMILY GLAZER for the Wall Street Journal, Sep 28

Wells Fargo & Co.’s board took an extraordinary step Tuesday in clawing back a big chunk of the compensation it had awarded to its longtime chief executive, John Stumpf.

The bank’s board said Mr. Stumpf agreed to forgo all unvested equity awarded to him, worth $41 million; not take a bonus during 2016; take no salary during an independent investigation by the board; and recuse himself from all deliberations related to the bank’s sales-tactics scandal.

It was a move so sweeping, and so rare, that governance experts were left struggling for examples of similar moves by other big U.S. financial institutions.

Since the financial crisis, many financial firms have adopted clawback provisions at the urging of regulators and shareholder advocates, but corporate governance consultant Eleanor Bloxham said she couldn’t recall another time a major bank CEO had a pay clawback.

“This seems pretty historic to me,” said Ms. Bloxham, founder and CEO of advisory firm Value Alliance Co. “To actually claw it back after it’s been awarded is a more draconian step that we haven’t seen put into place before.”

The story continues in the October 2 New York Times:

If the goal is to keep corporate executives honest, compensation clawbacks aren’t doing the job.

That’s what the recent action by Wells Fargo’s board shows. Yes, the bank’s directors acted on Tuesday to recover $60 million in stock grants from two top executives in the wake of the phony-account-opening scandal. But the move came almost three years after the improprieties came to light — and should serve as Exhibit A for the shortcomings in these pay recovery programs.

Recouping compensation from top executives involved in misconduct seemed like a great idea after the Enron and WorldCom accounting scandals. Initially, Congress assigned the task to the Securities and Exchange Commission, the nation’s top securities regulator.

But the agency’s scope is limited. It could recover only a portion of pay from chief executives or chief financial officers if their companies were found to have cooked their books.

After the financial crisis, lawmakers went further, tasking the S.E.C. and other major financial regulators with writing new rules that would require companies to institute clawback policies of their own. Those rules are not yet final, and in testimony on Capitol Hill on Wednesday, Janet L. Yellen, the chairwoman of the Federal Reserve Board, said getting the rule on the books was a top priority.

Most companies already have such programs in place. Nevertheless, actual clawbacks remain unusual.

Even with its prosecutorial power, the S.E.C. has brought just 40 cases against top executives since 2011. Only 18 of those have generated cash payments from executives; some $17 million was returned to their companies. (Many of the cases are still being litigated.)

Clawbacks under voluntary corporate programs are even rarer. One recent case involved JPMorgan Chase and followed the $6 billion loss arising from the London Whale trading disaster. Top executives at the bank, including Ina R. Drew, its former chief investment officer, returned over $100 million as a result of the mess.

There are several reasons givebacks like the one at JPMorgan are such an anomaly. One is that corporations limit the scope of their recovery policies. For example, the policies are written to cover only a portion of an executive’s pay. “Clawbacks extending to all types of compensation are uncommon,” said James F. Reda, managing director of executive compensation consulting at Arthur J. Gallagher & Company. “They typically only apply to the cash portion and only to the top executives.”

In addition, recoveries are generally restricted to cases in which accounting improprieties are significant enough to force a company to restate its results. Or a company will require clawbacks only if the pay was based on inaccurate financial disclosures.

Wells Fargo’s policy contained both of these stipulations, neither of which applied to the account-opening scandal. Instead, the board apparently relied on a third policy when it extracted unvested stock grants worth $41 million from John G. Stumpf, the bank’s chief executive, and $19 million from Carrie L. Tolstedt, its former head of community banking, where the misdeeds took place. That policy covers actions that harm the bank’s reputation.

While the board’s action was decisive, it came long after The Los Angeles Times broke the story about Wells Fargo’s pervasive practice of pressing workers to open fake accounts to win promotions or receive bonuses. And the clawback decision came from a board under duress.

The $41 million in awards recovered from Mr. Stumpf did little to quiet the outrage on Capitol Hill. In his testimony before the House Financial Services Committee on Thursday, Mr. Stumpf endured even angrier questioning than he had in the Senate a week earlier.

Steven A. Bank, a law professor at the University of California, Los Angeles, and an expert on executive pay, said he was unsurprised that clawbacks are so rare. One major reason, he said, is that corporate directors are typically given enormous leeway in deciding when to pursue them. Unless they are forced to do something, they probably won’t.

“When is the board going to do it? When they are pushed to the wall,” Mr. Bank said in an interview. The language in the Wells Fargo policy gives its directors “a huge amount of discretion to say, ‘We did not determine there was misconduct,’” he added.

Another element of discretion inherent in clawback programs relates to the board’s judgment over whether any wrongdoing has a material impact on the company. This concept of materiality is famously subjective, giving directors lots of room to determine that improper activities were not in fact meaningful enough to recover pay.

The nebulous nature of materiality is a problem in these matters, said George S. Georgiev, an assistant professor at Emory University Law School. It is also a feature of the Wells Fargo case.

The bank has said that it fired 5,300 people for opening bogus accounts — about 1 percent of its work force. It has returned $2.6 million in fees that customers were improperly charged and paid a $185 million fine.

These figures pale, of course, when compared with Wells Fargo’s $1.9 trillion in assets and $23 billion in earnings last year. Such comparisons may have been a factor in the board’s initial reluctance to pursue clawbacks.

“Even though the fraud was on a massive scale, at the same time, the impact on the bottom line was fairly minimal,” Mr. Georgiev said in an interview. “Often in these borderline cases, you can tell yourself a story as to why something is material or not depending on what you want the outcome to be.”

It would be helpful, Mr. Georgiev said, if the S.E.C. were clearer in defining materiality for this purpose.

As the Wells Fargo case shows, clawback policies have not proved to be the punitive threat to managers that some thought they would be. To some degree, this is to be expected. After all, the bias among corporate directors is to reward executives with pay, not take it away.

But another problem with clawbacks may be that corporate directors tend to weigh them in a narrow, rules-based way when they should instead take a broader, more common-sense view.

“What can you cover by statute,” asked Frederick E. Rowe Jr., chairman of Greenbrier Partners, a money management firm in Dallas. “Not that much. But directors ought to know bad behavior when they see it. It all comes down to this: Are you doing something to the customer or for the customer?”

That seems a pretty simple question. Too bad the Wells Fargo board didn’t think to ask it. 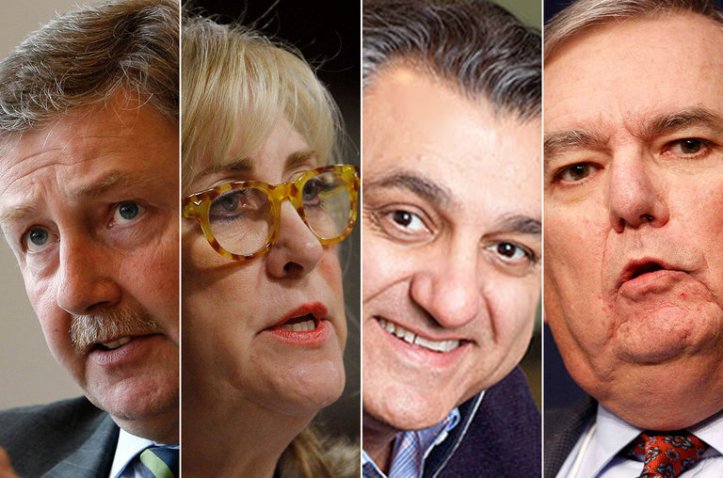 A Few Who Gave Back

Despite clawback provisions at many companies, their actual use is somewhat rare. Here are some top executives who had to repay.