In an article in today’s Wall Street Journal covering the tax plans of both presidential candidates, the writer reveals that the Democratic candidate, true to her word, promises, if elected, to redress through taxes most specifically much of the current inequality between the superrich and the middle and working classes. As her victory at the polls seems assured (WSJ gives her a 9 point lead in its current poll), let’s first hope we can hold her to it. And then, that the house and senate elections give her a favorable outcome in the Congress. 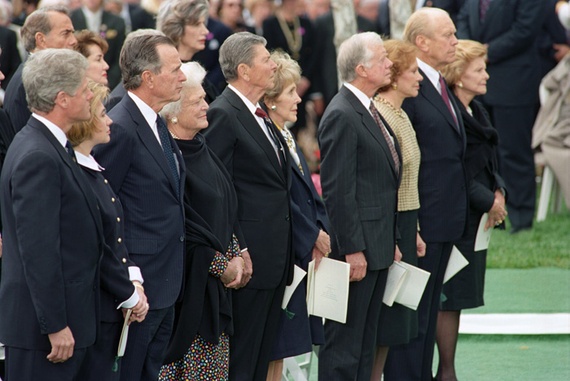 An interesting picture of Hillary Clinton in 1994 beside her husband, President Clinton, together with all the then living former American presidents, at Nixon’s funeral. Prophetic? Perhaps.

Mrs. Clinton, meanwhile, would boost taxes by a net $1.4 trillion, concentrated on the wealthiest households. The top 1% would see after-tax income fall 7.4% and face an average tax increase of $117,760 in 2017. Most people in lower income groups would get small tax cuts.

To pay for targeted tax cuts and spending programs, Mrs. Clinton would raise taxes on the wages, business income, capital gains and estates of the richest Americans, using new taxes to make them pay what she says is their “fair share.” Those changes would reduce the incentive for high-income taxpayers to save and invest, according to the center[1].

The analysis shows tax increases under the Clinton plan, on average, starting for the top 20% of households, which have incomes above $143,100, according to the expansive definition of income the center uses.

That is lower than the $250,000 income threshold Mrs. Clinton set as the level below which she won’t raise taxes. Those people wouldn’t face higher direct taxes, but as shareholders and workers they would bear part of the burden of her proposals to increase some corporate taxes.

The analysis includes a plan the campaign released Tuesday to double the $1,000 child tax credit for children ages 4 and under, which would deliver benefits directly to low-income families.

[1] The center referred to here is the Tax Policy Center of the Brookings Institution and Urban Institute. Sir Tony Atkinson, the British economist and author of Inequality: What Can Be Done?, reminds us that, reduced incentive or not, history has shown that raised taxes on the rich rarely have the dampening effect on the economy that conservative critics invariably prophesy.