We think that this news piece on the second page of yesterday’s Wall Street Journal is of enormous importance and would therefore like to highlight it. Basically, it explains why labor (wages), except at the highest levels, has never recovered from the Great Recession (in fact, never will), why all the recovery profit since then (and there has been a lot) has gone to the people at the top, and why we will never see economic growth of 3% and 4% as we did in the years after the Second World War again. 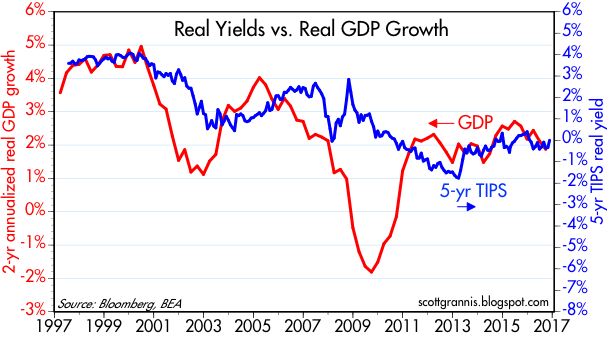 In the mid-1990s, when John Fernald had to write a memo for his bosses at the Federal Reserve on the merits of internet access at work, he was stumped.

“I couldn’t quite get what the benefit was,” he recalled in a recent interview.

Today, the Fed economist has a clear and very influential view. His research found that the information technology boom of the 1990s helped businesses become more efficient until about 2003. But that boost began fading by 2004, and now the benefits of tech innovation flow more to leisure activities, such as social media and smartphone apps.

More fun, perhaps, but not much increase in economic output per labor hour, or productivity—the key to rising living standards.

His work on the technology boom’s impact on productivity has reshaped the way central-bank officials see economic growth, interest rates and inflation.

For several years after the Great Recession, Fed officials were puzzled by persistently disappointing U.S. economic growth, particularly given their efforts to juice it with superlow interest rates. They now believe one major cause was a slowdown in productivity gains, but they have differed over whether this was a long-term or temporary postcrisis problem.

Mr. Fernald, a senior research adviser at the Federal Reserve Bank of San Francisco, has played a key role in convincing many top Fed officials that the productivity slowdown began well before the 2008 financial crisis.

Stanford University economist Robert Hall said Mr. Fernald “has been a voice of sanity in discussions of the causes of the recent productivity slowdown and the outlook for future productivity growth. He properly emphasizes the uncertainty about growth.”

Long-term economic expansion is the result of a growing workforce, investment in capital such as technology and buildings, and then combining them in new ways to boost efficiency—an element called “total factor productivity”[see below], a key measure of the economic contribution of innovation. Total factor productivity grew an average 1.8% a year from the end of 1995 through 2004, but growth has slowed since then to an average 0.5% annually.

The problem, in Mr. Fernald’s mind, is that today’s innovations are focused on improving leisure time, not business efficiency.

“Tremendous things are happening in Silicon Valley and elsewhere in terms of information technology, the internet, software and the like,” said Mr. Fernald. “But to really change the productivity numbers, those things have to translate into how businesses throughout the economy operate.”

Weak output gains also reflect a slowdown in the growth of the labor force and a plateauing of educational attainment, Mr. Fernald says. He puts the new normal for U.S. economic growth at 1.5% to 1.75% a year—roughly half the typical range of 3% to 4% from the end of World War II to 2005. [Interestingly, Piketty also set the new normal at 1.5%, though no one seems to have paid much attention to him, although they should. WSJ this morning is still citing 3% to 4% economic growth as what we should expect, in spite of having run this article that denies it the day before. Don’t they read their own newspaper?] 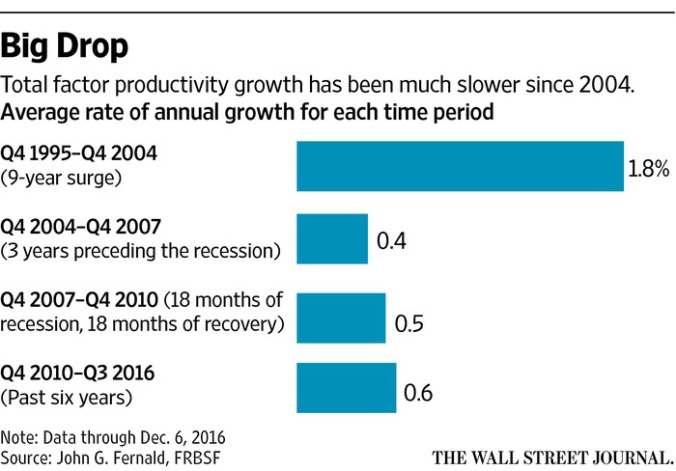 Mr. Fernald, 52 years old, joined the Fed in 1993, after finishing his Ph.D. in economics at Harvard University. He began his career at the Fed Board of Governors, focusing on China, Hong Kong and Taiwan. While he still dabbles in those areas, he has focused for the past 15 years on productivity.

Mr. Fernald joins a bevy of economists aiming to understand slowing growth. A different school of thought believes much of the productivity slowdown can be traced to the severity of the Great Recession. [Time will soon show who is right. We’re placing our money on Piketty and Mr. Fernald, Trump with his 4% economic growth be damned!]

Mr. Fernald says he is less dogmatic in his vision than some of his peers. For example, the New Jersey native says he is more “agnostic” on the future of productivity growth than Northwestern University’s Robert Gordon. Mr. Gordon has argued that the rapid U.S. economic growth experienced from 1870 to 1970 is a bygone era, when groundbreaking innovations such as electricity, the interstate highway system or indoor plumbing dramatically boosted efficiencies.

Mr. Gordon says he has “good reasons for my position that productivity growth will remain relatively slow,” in the range of 1% a year compared with 3% a year in previous eras. He believes technological innovation will have a more evolutionary, rather than revolutionary, impact on growth over the next two decades.

Just as he didn’t foresee the value of the internet in the workplace immediately in the mid-1990s, Mr. Fernald says it is still possible businesses will find ways to use innovations to their benefit.

While insisting that “no one in the Federal Reserve system just accepts anyone else’s ideas,” Mr. Fernald says his theories seem to have caught on quickly.

When he first started the research that would ultimately become a frequently cited 2014 paper, he recalls people responding to his ideas with surprise, such as “Oh, that’s interesting.”

“I think by the time it was published, I would hear people say, ‘Oh, isn’t that the conventional wisdom?’” he said.

Total Factor Productivity (TFP) is the portion of output not explained by the amount of inputs used in production. … As such, its level is determined by how efficiently and intensely the inputs are utilized in production.

Economists have long recognized that total factor productivity is an important factor in the process of economic growth. However, just how important it is has been a matter of ongoing controversy. Part of this controversy is about methods and assumptions. Total factor productivity growth is estimated as a residual, using index number techniques. It is thus a measure of our ignorance, with ample scope for measurement error.