Two articles recently, one from the Wall Street Journal and the other from the New York Times, give us hope that, in spite of the President’s threat to demolish Dodd-Frank, big business may have more sense than to abandon it in its entirety. Concern for their fallen reputation with the public at large and pressure from their stockholders may very well  lead them to retain and adopt some of the restraints that the regulatory law would have required. See below: 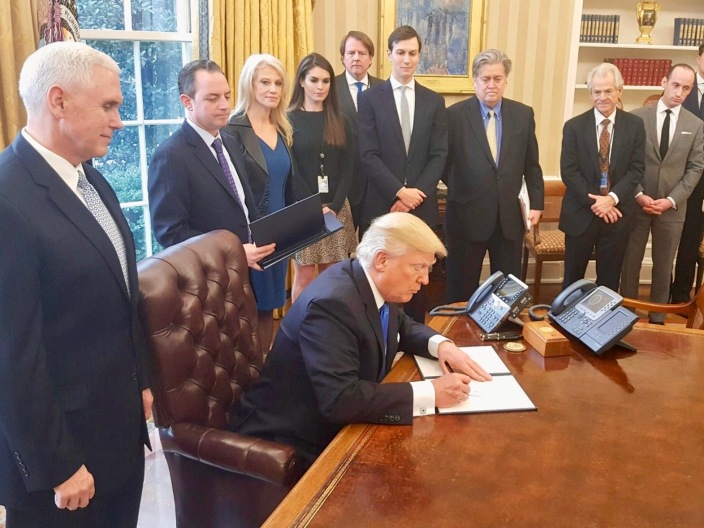 The Trump administration has pledged to boost economic growth by cutting two regulations for every new one created. Investors have responded by bidding up stocks in the hope that profits will surge.

In the past companies would have been off to the races, building belching smokestacks and cutting back on worker safety, though, all in the name of profits. Today, businesses will rejoice at reduced red tape and might invest in areas they have avoided, but few will pollute more or risk damaging their reputations as good corporate citizens. The extent to which businesses will take advantage of the easier regulations will determine whether the economy gets the boost the administration is seeking.

Business[es] that sell to consumers are especially sensitive to their reputations. But all U.S. companies are increasingly wary of how their shareholders might respond to their behavior. Investors that incorporate businesses’ records on the environment, social factors such as diversity and good governance characteristics into their decisions account for $9 trillion in investment assets in the U.S. While that is about 20% of overall assets, these funds have grown 33% a year over the past two years. The numbers in Europe are far higher.

“This was something nobody really cared about 20 years ago from a U.S. investment perspective,” said Savita Subramanian, an equity and quantitative strategist at Bank of America Merrill Lynch. New research by Ms. Subramanian shows they should. Her group analyzed corporate ratings of environmental, social and governance characteristics and found that since 2005, companies that scored in the top third relative to their peers outperformed stocks in the bottom third by 18 percentage points.

Ms. Subramanian’s data also show that companies that score well had smaller price declines on average, which she sees as a result of their efforts to control risk. Ms. Subramanian, a quantitative analyst for Merrill Lynch since 2001, was surprised that the scores had a measurable effect. “I’m so used to running these back tests and you get zero impact,” she said.

Corporate executives are nearly unanimous that cutting red tape and compliance costs will boost their performance. Banks in particular would benefit from reductions in compliance requirements that have mushroomed in recent years. But beyond that, they are cautious about loosening safeguards just when their shareholders are looking more closely. “You don’t want to wait until your investors are demanding it, you know which way the parade is going,” said David A. Golden, the chief legal and sustainability officer at Eastman Chemical .

Eastman has faced both higher expenses from compliance and benefited from rules, for example, by building a big business selling products to the auto industry that improve fuel efficiency. And regardless of what happens in the U.S., Eastman makes products to a single global standard, either based on U.S. or foreign rules, whichever are higher.

The first test of corporate behavior will likely be in the energy industry where the Trump administration and the Republican Congress have quickly moved to roll back a rule on emissions of methane, a potent greenhouse gas, and one that protects streams from pollution from coal mining. The regulations, though, came in the waning days of the Obama administration, so it isn’t as if companies will have to go back on longstanding practices.

Analysts have struggled for years to quantify the cost of regulation. In the meantime, businesses have new pressures to hold to high standards. The economic boost from slashing the rules may be less than the administration thinks.

Have Bankers Really Learned a Lesson? 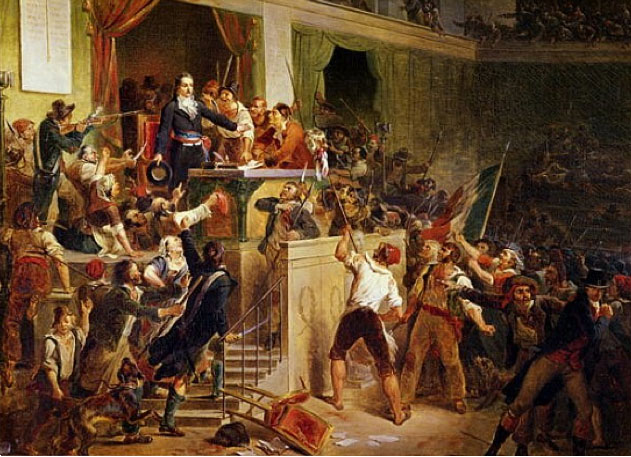 It’s been a rough eight years in exile for the big banks. Barely three months into the job, President Obama told the chief executives of the nation’s most powerful banks that his administration was the only thing standing “between you and the pitchforks.” Later he said he did not get elected to help out “a bunch of fat-cat bankers.” There were well-deserved public floggings of bankers in Congress and in front of the Financial Crisis Inquiry Commission. And in July 2010, President Obama signed the Dodd-Frank law, a complex set of rules governing what bankers and traders could do to make money and the risks they could take, intended to prevent another financial crisis.

Dodd-Frank and other financial regulations adopted around the same time have made it much harder for Wall Street to do what it does best: provide much-needed capital to businesses that want it. They are often cited, correctly, as a big culprit behind what Lawrence Summers, the Harvard economist and former Treasury secretary, refers to as “secular stagnation,” an economy that is “stuck in neutral” and condemned to a mere 2 percent annual gross domestic product growth rate.

Meanwhile, Mr. Obama’s Justice Department forced the big firms — or more accurately their shareholders — to cough up more than $200 billion in fines as punishment for, among other things, the role the banks played in knowingly packaging shoddy mortgages into securities and then passing them off as AAA-rated investments. We were led to believe these exorbitant fines were the same as justice, but that’s not remotely true, especially since many of the facts about what happened were whitewashed as part of the settlements and no individual Wall Street bankers, traders or executives have been held responsible for their wrongdoing. . . . 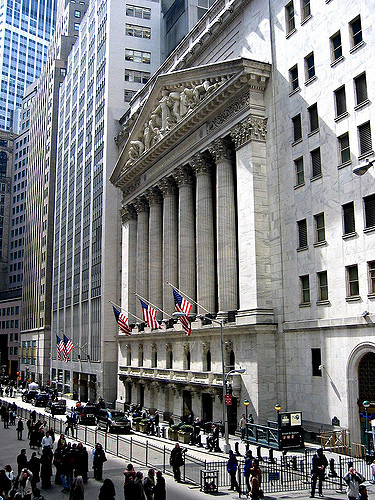 It’s about time we stopped flogging Wall Street, but we shouldn’t forgive it, either. These rich white men need to take advantage of their second chance to help the American economy get back on a more secure footing, one that works for everyone, not just for the elites. . . .

Parts of the Obama-era regulations make sense and should be kept: for instance, demanding that big banks have more capital and less leverage; requiring that often-risky financial derivatives be traded on exchanges so that their pricing is more transparent; and ensuring that brokers have their customers’ best interests at heart when advising them on their retirement accounts — the fiduciary rule, which Mr. Trump is unfortunately likely to eliminate. . . .

If Mr. Trump does even a portion of what he promised he would do — and he’ll need congressional approval to do much of anything — Wall Street will applaud, and smarter regulation will probably serve as a catalyst to get the economy humming again. But repealing the bad regulations, let alone the good ones like the fiduciary rule, will do nothing to rehabilitate Wall Street’s image or overcome the view that the markets are rigged against the average investor.

The 2008 financial crisis badly hurt Wall Street by removing all doubt that the people who work there are in it for themselves (and their fat paychecks) regardless of the consequences of their poor judgment on the rest of us. That perception must be changed if we want ordinary Americans to benefit from a functioning Wall Street.

So while Mr. Trump and his banker buddies whittle away at Dodd-Frank, they need to do something else as well: junk Wall Street’s compensation system, which continues to reward bankers for making big bets with other people’s money and does nothing to hold them accountable when the bets go bad. We need to replace this system with one that rewards people when they succeed but penalizes them when they fail.

To do this, the government could require that the leading executives at each big bank — the top 500 or so people — put their own assets on the line in the event of a bankruptcy filing, bailout or default. Creditors and shareholders would have what’s called a first lien against executives’ co-op apartments, Hamptons houses, art collections and bank accounts. This would go beyond a now doomed Dodd-Frank proposal to claw back bonuses. Only something like this would properly align risk and reward on Wall Street, and help to prevent the next financial crisis.

This is actually how Wall Street worked once upon a time, when it was just undercapitalized small firms in which partners invested their own hard-earned capital. They lived with a daily existential threat that they could lose everything because of a foolish trader or an unscrupulous banker. But this changed in 1970, when the brokerage firm Donaldson, Lufkin & Jenrette sold a portion of its stock to the public. One Wall Street firm after another followed, with the climax coming in May 1999, when Goldman Sachs went public. Virtually overnight, Goldman’s partners were worth tens, if not hundreds, of millions of dollars. 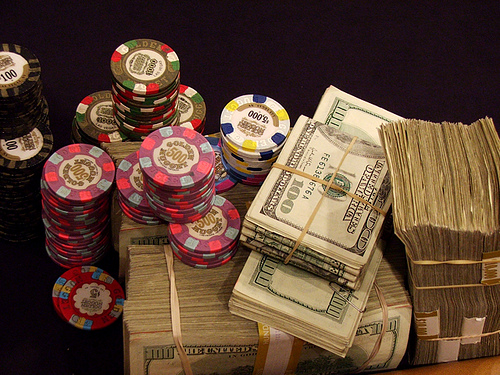 Wall Street was no longer gambling with its own money, but with the public’s. As a result, for the past 47 years, Wall Street has been rewarding its star performers for generating as much revenue as possible, without a particular concern for how it was done. The only wonder is why it took so long for the 2008 crisis to come along.

People are pretty simple. If you reward them to take big risks with other people’s money, that is exactly what they will do. So sure, Mr. Trump, go ahead and work to repeal what you don’t like about Dodd-Frank. Try to increase G.D.P. growth to 4 percent. Ratchet up the supply of high-paying jobs. Move millions of people out of poverty into the middle class. An untethered Wall Street will help make that possible.

But the repeal of burdensome regulations cannot be done in a vacuum. Wall Street must also be forced to change its compensation system to one where there is real accountability for the bad behavior of bankers, traders and executives. Accidents are inevitable. Wall Street needs — and wants — seatbelts and speed limits.

William D. Cohan is the author of the forthcoming “Why Wall Street Matters.”