Manufacturing jobs as a major employer in America have mostly vanished. Now retail jobs, currently the leading employer, are seriously threatened and may disappear within fifteen years. Does anyone care?

By SARAH NASSAUER, July 20, 2017 for The Wall Street Journal

Last August, a 55-year-old Wal-Mart employee found out her job would now be done by a robot. . . . Wal-Mart Stores Inc. started using a hulking gray machine that counts eight bills per second and 3,000 coins a minute. The Cash360 machine digitally deposits money at the bank, earning interest for Wal-Mart sooner than if sent by armored car. And the machine uses software to predict how much cash is needed on a given day to reduce excess.

“They think it will be a more efficient way to process the money,” said the employee, who has worked with Wal-Mart for a decade. . . . 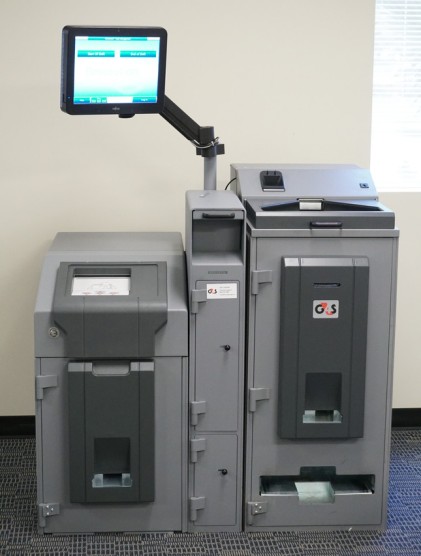 A Cash360 machine similar to those now in the back rooms of most of Wal-Mart’s 4,700 U.S. stores. PHOTO: G4S/BANK OF AMERICA

The Cash360 machines in the back of stores let cashiers take out and deposit money from the device directly, granting them access by scanning their hands for unique vein patterns. . . .

The store accountant displaced last August is now a greeter at the front door, where she still earns $13 an hour. . . .

Economists say many retail jobs are ripe for automation. A 2015 report by Citi Research, co-authored with researchers from the Oxford Martin School, found that two-thirds of U.S. retail jobs are at “high risk” of disappearing by 2030.

Self-checkout lanes can replace cashiers. Autonomous vehicles could handle package delivery or warehouse inventory. Even more complex tasks like suggesting what toy or shirt a shopper might want could be handled by a computer with access to a shopper’s buying history, similar to what already happens online today.

“The primary predictor for automation is how routine a task is,” said Ebrahim Rahbari, an economist at Citi Research. “A big issue is that retail is a sizable percentage of the workforce.”

Nearly 16 million people, or 11% of nonfarm U.S. jobs, are in the retail industry, mostly as cashiers or salespeople. The industry eclipsed the shrinking manufacturing sector as the biggest employer 15 years ago. Now, as stores close, retail jobs are disappearing. Since January, the U.S. economy has lost about 71,000 retail jobs, according to data from the Bureau of Labor Statistics.

“The decline of retail jobs, should it occur on a large scale—as seems likely long-term—will make the labor market even less hospitable for a group of workers who already face limited opportunities for stable, well-paid employment,” said David Autor, an economist at the Massachusetts Institute of Technology.

Earlier this year, Beverly Henderson took a pay cut and gave up her health-care benefits when she left Wal-Mart in the wake of the back-office changes. “I’m 59 years old,” she said. “I never worked on the floor. I’ve always worked office positions and I had no desire.”

She is now an office manager at a local business she says can’t afford to give her the same perks or $16.75 an hour she made after 16 years with Wal-Mart. “I would have never left Wal-Mart. They were paying me decent,” said the Southport, N.C., resident. At Wal-Mart, Ms. Henderson managed store invoices, a job the company used technology to mostly centralize. . . .

Wal-Mart has long squeezed efficiency out of its business, both in stores and throughout its vast supply chain. Although it employs 1.5 million people in the U.S., it has around 15% fewer workers per square foot of store than a decade ago, according to an analysis by the Journal. . . .