Companies on the conservative end of the ideological spectrum are also increasingly willing to stand up for their principles, and just as likely to face criticism. After it was revealed that the family behind the fast-food chain Chick-fil-A supported groups that opposed same-sex marriage, gay rights protesters targeted the restaurants.

Hobby Lobby, the craft-supply chain run by a conservative Christian family, challenged a provision in the Affordable Care Act that required family-owned corporations to pay for insurance coverage for birth control. Despite drawing the ire of the left, Hobby Lobby took its case to the Supreme Court and won.

Kevin Plank of Under Armour

Critics of Mr. Plank’s decision cast their net wide, going after all the chief executives who quit the president’s business advisory groups. “This is a remarkable moment in history,” said Lou Dobbs, a Fox Business Network host. “Every one of those C.E.O.s, mark my words, is a coward — and the president is exactly right — a grandstander in the service of the left. And no one should make any mistake: This is a coordinated, orchestrated attack against this president.”

John Carney, a business editor for Breitbart News, the conservative news site, wrote that “corporate America is part of the opposition.”

“The confederacy of the media institutions, the American left, and Corporate America has aligned itself against the populist uprising that brought Trump to the White House,” Mr. Carney wrote. “The battle lines are clear.”

Those executives who go out on a limb know the risks. “We all recognize that with every decision we make, there is a group of people that are not going to agree with us,” Mr. Schultz said. “But you must define your core purpose for being. We stand in the interest of something greater than just making money.”

Diversity — of opinions, ideologies and religions — is what makes taking a stand on moral issues so treacherous for C.E.O.s. Yet paradoxically, it is also diversity — of races, genders and worldviews, among customers and the work force — that makes many of the executives, when forced to take a stand, come down on the side of inclusion, tolerance and acceptance. 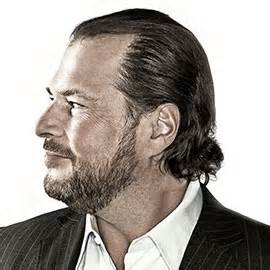 Darren Walker of Ford Foundation and Marc Benioff of Salesforce

What’s more, some executives have concluded that speaking out on issues of morality can improve more than their reputations — it can benefit recruitment, morale and even sales. “Our employees come here knowing that this is something that is extremely important to us,” said Mr. Benioff of Salesforce. “Business is the greatest platform for affecting change.”

If the voices of business leaders seem amplified, that is perhaps because in such partisan times, few politicians can speak to both sides of the aisle, leaving a vacuum for business leaders to fill. This last week, the executives on Mr. Trump’s business advisory councils piped up, led by Mr. Frazier of Merck.

The black chief executive of a $172 billion company — a multimillionaire who was born in a poor neighborhood, a former lawyer who fought for civil rights and had agreed to advise the president — Mr. Frazier offered remarks that set the tone for the business world at large.

“Our country’s strength stems from its diversity,” he wrote, adding, “America’s leaders must honor our fundamental values by clearly rejecting expressions of hatred, bigotry and group supremacy, which run counter to the American ideal that all people are created equal.”

The C.E.O.s had found their voice.

This concludes this four-part article