Sarah Anderson is the Director of the Global Economy Program at the Institute for Policy Studies, a multi-issue research and education center founded in Washington, DC, in 1963. She is a co-author of the books Field Guide to the Global Economy (New Press, 2005) and Alternatives to Economic Globalization (Berrett-Koehler, 2004) as well as dozens of studies and articles on the impact of trade and investment liberalization on communities, workers, the poor, and the environment. She is also the co-author of 12 annual studies on the growing gap between CEO and worker pay.

She had this to say in today’s New York Times to Randall Stephenson of AT&T about his advice to Congress and the promised tax cuts: 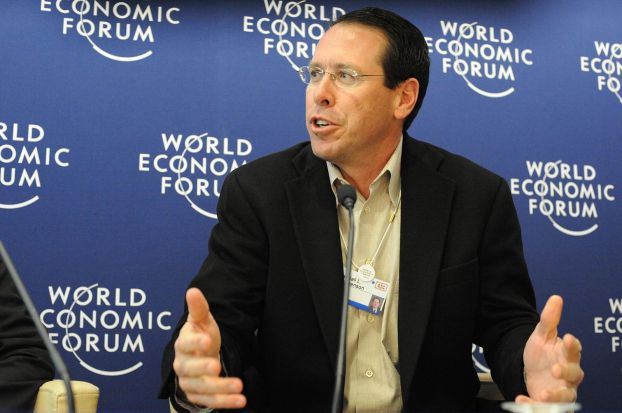 By  SARAH ANDERSON for The New York Times

“The arithmetic for us is simple,” AT&T’s chief executive, Randall Stephenson, said on CNBC in May. If Congress were to cut the 35 percent tax on corporate profits to 20 percent, he declared, “I know exactly what AT&T would do — we’d invest more” in the United States.

As Congress prepares to take up tax legislation this fall, including an effort to reduce the corporate tax rate, this bold jobs claim merits examination. Notably, it comes from the chief executive of a company that’s already paying comparatively little in federal taxes.

According to the Institute on Taxation and Economic Policy, AT&T enjoyed an effective tax rate of just 8 percent between 2008 and 2015, despite recording a profit in the United States each year, by exploiting tax breaks and loopholes. (The company argues that it pays significant taxes, at a rate close to 34 percent in recent years, but that includes deferred taxes and state and local levies.)

Despite the enormous savings AT&T has realized, the company has been downsizing. Although it hires thousands of people a year, the company, by our analysis at the Institute for Policy Studies, reduced its total work force by nearly 80,000 jobs between 2008 and 2016, accounting for acquisitions and spinoffs each involving more than 2,000 workers.

The company has also spent $34 billion repurchasing its own stock since 2008, according to our institute report, a maneuver that artificially inflates the value of a company’s shares. This is money that could have gone toward research and development or hiring.

Companies buy back their stock for various reasons — to take advantage of undervaluation, to reward stockholders by increasing the value of their shares or to make the company look more attractive to investors. And there is another reason. Because most executive compensation these days is based on stock value, higher share prices can raise the compensation of chief executives and other top company officials.

Since 2008, Mr. Stephenson has cashed in $124 million in stock options and grants.

Many other large American corporations have also been playing the tax break and loophole game. Their huge tax savings have enriched executives but not created significant numbers of new jobs.

Our report analyzes the 92 publicly held American corporations that reported a profit in the United States every year from 2008 through 2015 and paid less than 20 percent of their earnings in federal income tax.

We chose this particular tax threshold because, as Mr. Stephenson mentioned, House Republicans are proposing to reduce the federal statutory corporate tax rate to 20 percent, down from the current 35 percent. President Trump wants an even deeper cut, down to 15 percent.

If claims about the job-creation benefits of lower tax rates had any validity, these 92 consistently profitable firms would be among the nation’s strongest job creators. Instead, we found just the opposite.

The companies we reviewed had a median job-growth rate over the past nine years of nearly negative 1 percent, compared with 6 percent for the private sector as a whole. Of those 92 companies, 48 got rid of a combined total of 483,000 jobs.

Instead of tax-rate cuts for these big corporations, the coming tax debate in Congress should focus on making wealthy individuals and big corporations pay their fair share.

American multinationals hold $2.6 trillion in profits “offshore,” on which they would owe $750 billion in federal taxes if the money was repatriated. In most cases, these foreign profit stashes are merely an accounting fiction. Companies retain full access to these funds for use in the United States and could, if their executives so chose, use them to create jobs here.

Ordinary Americans have to pay all the taxes they owe each and every year. Offshore corporations should be required to do the same.

Beyond closing loopholes, we need to explore new ways to raise revenue fairly, including a tax on Wall Street speculation.

Most of us already pay a sales tax on gasoline, clothes and other basics. Why should hedge fund investors and other Wall Street traders pay no tax at all when they engage in short-term buying and selling of millions of dollars’ worth of stocks and derivatives? A fee of just a small fraction of 1 percent on each Wall Street trade would encourage longer-term investment while generating huge revenue for real job creation.

At a town hall this month at AT&T headquarters in Dallas, Mr. Stephenson urged his employees to call Congress and demand a corporate tax cut.

The message policy makers really need to hear? Stop peddling the myth that “tax relief” for big companies will be good for the rest of us.