And we predicted it would never happen. How wrong we were. This article from The New York Times discusses how it came about and where it might possibly go. A triumph for President Trump? Let’s see.

By JULIE HIRSCHFELD and BINYAMIN APPLEBAUM,  August 31, 2017 for The New York Times

. . . The Commerce Department said on Wednesday that the economy had expanded at an annual rate of 3 percent in the second quarter of the year, better than initially estimated, and a substantial acceleration over the first quarter’s lackluster 1.2 percent pace. . . .

Mr. Trump talked up the latest figures in a speech on Wednesday in Springfield, Mo., laying out his plans for tax overhaul. Despite nearly uniform skepticism from mainstream economists, he insisted that much faster economic growth was within reach.

“I happen to be one who thinks we can go much higher than 3 percent,” the president said. “There is no reason why we should not.”

There are several reasons that his goal is probably far-fetched, namely the country’s aging work force and slower population growth than in the past. Combine that with low productivity growth, and hitting Mr. Trump’s target begins to look like a Sisyphean challenge. . . .

No major Western economy is growing close to that rate — and none has in years. The fastest-growing large economy, China’s, grew 6.7 percent last year.

Still, with personal consumption accounting for nearly 70 percent of economic output, the new willingness of shoppers to open their wallets is a good sign. . . .

The improvement was driven in large part by strong consumer activity, with purchases of durable goods like automobiles and appliances rising strongly. Increased business spending also helped lift the latest estimate above Commerce Department’s initial reading of 2.6 percent for the quarter. . . .

The government’s data reflects all purchases, whatever the retail channel, which explains why malls and street-level stores may be suffering even as consumers become more bullish and the broader economy powers ahead.

Most economists are expecting the economy to expand at a rate of roughly 3 percent in the second half of 2017. That pace should be strong enough to keep job growth and wages on track for further gains, while keeping the threat of inflation modest for now.

Besides wild cards like Hurricane Harvey’s impact on a broad swath of the Gulf Coast, and political uncertainty about issues like tax overhaul and a possible increase in infrastructure spending, traders are also keeping an eye on the Federal Reserve.

Most experts believe the central bank will raise interest rates just once more this year, but a faster economy or an increase in wages or inflation could prompt policy makers to move more quickly to tighten monetary policy and shrink the Fed’s balance sheet in 2018. . . .

On Wednesday, some economists offered improved expectations for job creation in August after the payroll processor ADP reported that private employers added 237,000 jobs, well above the 185,000 increase that had been expected.

The acceleration in spending suggests that a so-called Trump bump — improved sentiment among consumers and more optimism among business leaders — may be translating into concrete actions like homeowners buying new appliances and companies investing in new software or equipment.

“The consumer is in the driver’s seat in terms of economic growth,” said Scott Anderson, chief economist at Bank of the West in San Francisco. “It puts us on a stronger path going into the third quarter, although Hurricane Harvey introduces some uncertainty.”

Mr. Anderson expects growth in the range of 3 to 3.5 percent in the current quarter, but he said the hurricane could shave as much as 0.3 percentage points off that figure. A hit like that would mostly be reversed in the year’s final quarter as rebuilding efforts kicked in, he added.

It will take more than one quarter’s data for the White House or congressional Republicans to be able to claim credit for lifting the economy’s growth trajectory. Under President Barack Obama in 2013 and 2014, quarterly growth occasionally exceeded 3 percent. But, in contrast to what happened during recoveries in the 1990s and mid-2000s, annual growth never passed that threshold. 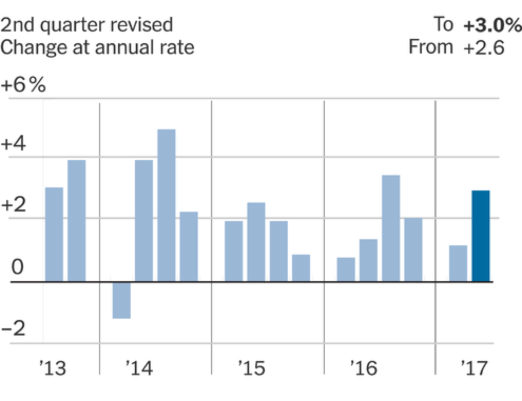 If the economy were to sustain the current pace of expansion, it would be a significant uptick from the 2 percent annual growth rate that has mostly prevailed since the recovery began.

A difference of a single percentage point may not sound like much, but the stakes are huge in a $19 trillion economy. The acceleration could also help lift wage growth, which has been frustratingly slow for years despite steady hiring, a surging stock market and rising home prices.

Private-sector estimates of third-quarter growth have also inched higher lately. Macroeconomic Advisers now forecasts a 3.4 percent expansion rate for the current quarter, up from the 2.9 percent figure it forecast earlier this month.

Increases in consumer spending and business investment powered nearly all of the revision issued on Wednesday. Factors like net exports and residential investment barely changed, while government spending added only 0.1 percentage points.

The Commerce Department offers three estimates of growth as more data becomes available, with the final figure for second-quarter economic activity to be released on Sept. 28.