The Supreme Court opened Monday with a discussion of whether companies can require workers, in violation of standing National Labor Relations Board agreements dating back to the New Deal, to arbitrate disputes individually rather than join in class action suits. This is related to the same restrictions that you and I are subject to in our contracts with credit card companies and companies that have sold us our electronic devices, so we should pay attention. 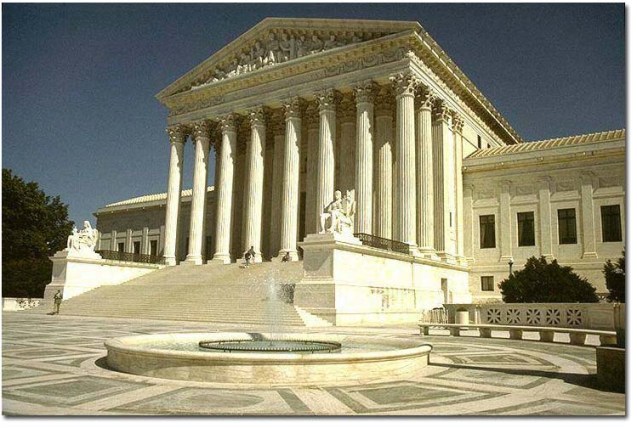 The Supreme Court justices returned to the bench Monday ready to argue — and disagree sharply along usual ideological lines — on a basic question of workers’ rights in the 21st century.

Can employees join together to argue their company is violating the law by denying them overtime pay or minimum wages or by discriminating against women or minorities?

To the court’s four liberal justices, this looked like a case of back to the future. Early in the 20th century, companies often required workers to waive their rights to join a union or take collective action. Those agreements were referred to as “yellow dog contracts,” Justice Ruth Bader Ginsburg noted.

In 1935, under President Franklin D. Roosevelt, Congress adopted the National Labor Relations Act, which guaranteed workers a right to join a union and to take “other concerted activities” to protect their interests. The yellow dog contract became a thing of the past.

In the last decade, however, a growing number of companies have started to require employees to waive their rights to sue in court or join class action cases and agree instead to arbitrate disputes as individuals. Under these rules, employees are barred from joining co-workers to seek overtime pay or other benefits promised by law.

About 60 million non-unionized private sector workers are bound by arbitration clauses — that’s about half the private-sector labor force — and 25 million of them must bring their claims as individuals.

Companies say arbitration is more efficient and less costly than going to court, and that a worker retains the right to bring an individual claim.

Worker’s rights advocates say that as a practical matter, an employee will not contest the legality of a company policy if he or she must do so alone.

As a legal matter, the case involves a conflict between two major laws — the National Labor Relations Act and the Federal Arbitration Act, passed in 1925, which generally encourages the use of arbitration as a substitute for lawsuits.

In Monday’s case, a top Trump administration lawyer and a former Bush administration attorney, now representing private companies, made a joint appearance, urging the court to uphold the individual arbitration rule and bar workers from joining together to bring legal claims.

If the two laws conflict, the arbitration rules should be upheld, they said.

Jeffrey B. Wall, the new deputy solicitor general, agreed, pointing to the Federal Arbitration Act. The arbitration law makes it “clear that these agreements ought to be enforced,” he said.

The liberal justices strongly disagreed. “What you are saying is overturning labor law that goes back to FDR at least, the entire heart of the New Deal,” said Justice Stephen G. Breyer.

Ginsburg said the 1925 arbitration law concerned merchants who were making commercial deals. By contrast, for employees today, “there is no true bargaining. It’s the employer who says that if you want to work here, you sign this,” she said.

“This is truly a situation where there is strength in numbers,” she added. “That was the core idea of the NLRA.”

But as soon as the general counsel for the National Labor Relations Board rose to the lectern to argue in favor of the labor law, the court’s conservative justices pounced. Richard Griffin Jr., an Obama appointee, said the labor board was right to reject employment contracts that forbid employees from bringing joint claims.

“I’m not sure I fully understand your position,” said Chief Justice John G. Roberts Jr. If arbitration is legal for employees, why should they be able to ignore the rule requiring disputes be resolved individually, he asked.

Justice Samuel A. Alito Jr. said the court had upheld arbitration agreements in a variety of contexts.

Justice Anthony M. Kennedy suggested a middle-ground solution. Disgruntled workers could hire the same lawyer, who could then file a series of individual arbitration claims on their behalf.

[Justice Elena Kagan, in a New York Times article of the same date, said that was not good enough.“The fact that there is one way to exercise a right left over does not make it O.K. if we’ve taken away another 25 ways of exercising the right,” she said. “You know, when we think about the First Amendment, we don’t say we can ban leafleting because you can always write an op-ed.”]

Justices Clarence Thomas and Neil M. Gorsuch sat silently, but their votes could create a conservative majority to uphold company rules that bar workers from joining together in legal claims.

The justices agreed to decide three separate cases, all of which involved claims for overtime pay. NLRB vs. Murphy Oil came from gas station workers in Alabama; Ernest & Young vs. Morris came from several accountants in northern California; and Epic Systems vs. Lewis came from technical writers in Wisconsin.