Part Two of an article from The New York Times on how the President’s proposed curtailment of the Affordable Care Act will act to the detriment of those that voted for him. 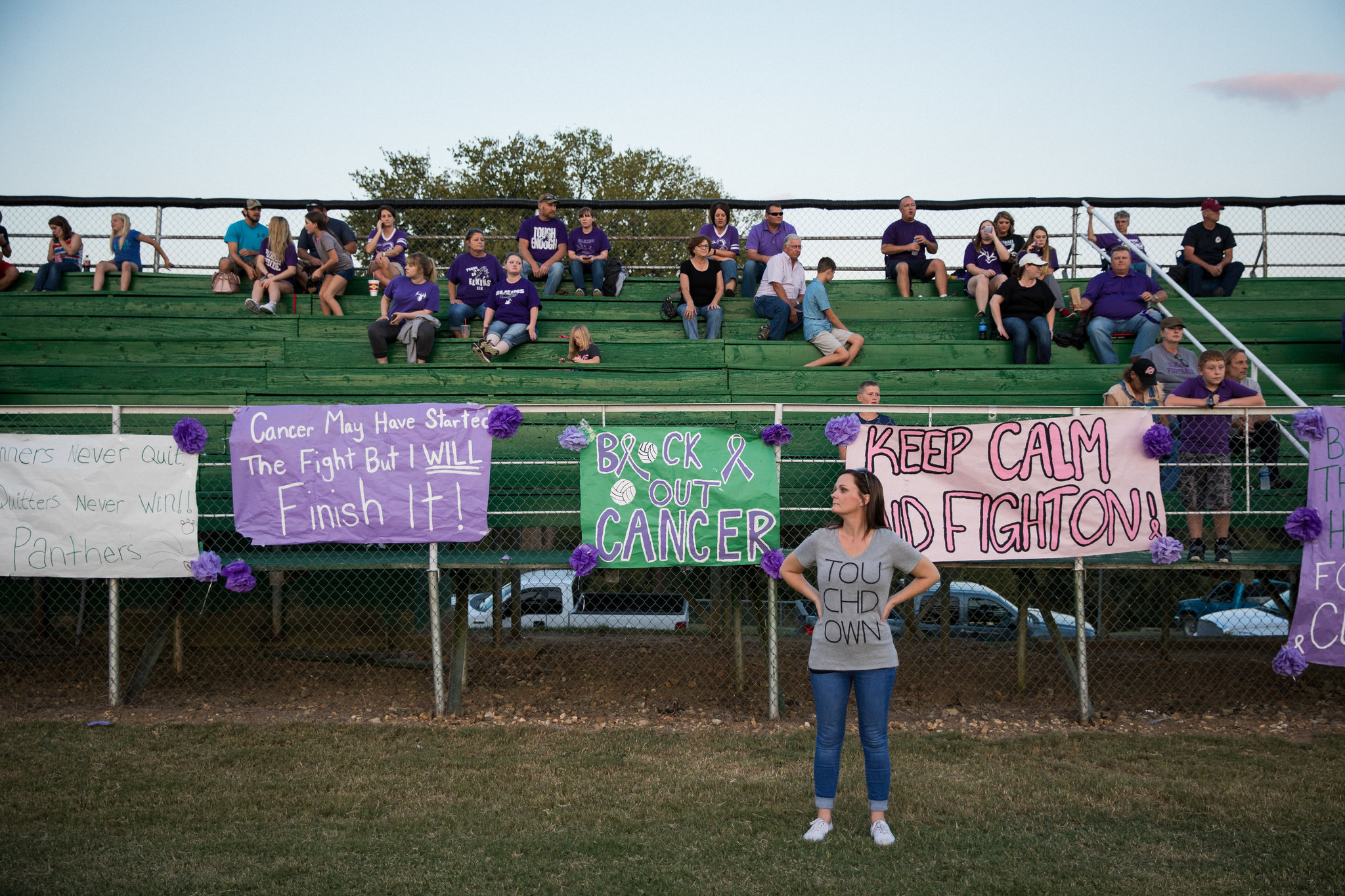 Fans arriving for a high school football game in Yellville, Ark., that raised money for the Peitz Cancer Support House

By PATRICIA COHEN  Photographs by DAMON WINTER  Oct. 16, 2017 for The New York Times

The financial effect of the Affordable Care Act on the hospital has been mixed. The Medicaid expansion in Arkansas allowed residents earning 138 percent of the federal poverty level — $16,643 for an individual or $33,948 for a family of four — to buy private insurance paid for primarily by the federal government. That extended health care access to people in the hills and surrounding counties who had never been insured, and shrank charity-case costs.

But it also reduced Medicare reimbursements, which cover the elderly. This trade-off left many hospitals ahead, but not Baxter Regional, which has an unusually large share of Medicare patients — 67 percent compared with a national average of 40 percent.

The added $4 million in Medicaid payments did not make up for the $12 million lost through Medicare. As Mr. Peterson points out, however, the Republican proposals to remake the law would have decreased Medicaid money without restoring any Medicare cuts. Arkansas would be particularly hard hit because it is among a handful of states with provisions that automatically end expanded Medicaid benefits if federal funding is reduced. The results would include fewer insured patients and a lot more debt.

A repeal now, Mr. Peterson said, would be calamitous.

“I was not initially a proponent,” he said of the law. “But once Medicare was cut, then it was very important to make sure you got the whole benefit from the Medicaid expansion. Otherwise, you would have just seen the cuts. Why would I be for that?”

Health Care as a Reason to Stay.

It’s a five-minute drive from Baxter Regional to the office of Robin Myers, the chancellor of Arkansas State University-Mountain Home, a two-year college that works closely with the hospital to produce job-ready students.

“I can’t tell you how intricately we are tied together with the hospital,” Mr. Myers said. “We could not survive without them.”

“We’re really educating people in the health care professions to stay here,” he added, noting that the school’s typical student is a 28-year-old woman. Once housed in a funeral home and feed store, the college now occupies a stately campus completed in 2000 and styled on Thomas Jefferson’s neo-Classical design for the University of Virginia.

Mountain Home, like other rural towns, is seeing an outflow of young people. The kindergarten has 100 fewer children than it did five years ago. But Mr. Myers said that “if we have opportunities for them, they want to come back.”

Marjorie Swanson’s daughter, Alison, 23, returned after graduating from college in 2016 with a fine-arts degree. She found an internship with a Stanford University professor, but when it ended, she had no job and no way to afford San Francisco’s sky-high rents.

“I was broke,” she said. “I came back home and was just trying to save up money and working a minimum-wage job that was terrible.”

When a rare opening as a well-paid pharmacy technician arose, her mother urged her to apply. “I’m really, really fortunate, and I really like this job,” Ms. Swanson said. “I would have never thought I would have done this, but the opportunity was there.”

Dr. Lucas Bradley, a neurosurgeon who had just finished up his residency in Little Rock, grew up in Maine, not Mountain Home, but he and his wife, Karla, knew they wanted to raise their family in a small town. Without a growing full-service hospital, though, Dr. Bradley, 37, said he probably wouldn’t have moved here and bought a house. His children — six with a seventh on the way — wouldn’t attend nearby public schools. His wife wouldn’t shop at Harps or fill the car’s gas tank at Valero. His family wouldn’t attend one of the area’s churches.

Members of the Bradley family — who have a seventh child on the way — on their property outside Mountain Home. A study found that Baxter Regional workers generated more than $216 million a year in economic activity.

An economic impact review by the hospital concluded that workers’ earnings combined with their spending on groceries, clothing and the like generated more than $216 million a year in economic activity and helped create 1,280 jobs beyond their own. The hospital spends an additional $19 million a year on goods and services in a dozen surrounding counties. Based on the loss of Medicaid expansion money, the review estimated that a repeal of the Affordable Care Act could mean up to 500 layoffs at the hospital.