Even The Wall Street Journal is warning how catastrophic the about-to-be-voted- on Republican tax bill will be, not only for the middle-class and the unfortunates at the bottom of our social chain but also for our economy as a whole.

After more than three decades as an investor, I fully appreciate that folks on Wall Street don’t have time to follow every detail of Capitol Hill’s policy debates. What matters to the financial industry is the bottom line. So how does the current Republican tax proposal look with that in mind?

On the surface, the GOP plan might seem to offer the kinds of short-term rewards that really resonate. But let’s face it: Republicans’ supposedly pro-business ideas have seemed that way before. While business owners and investors may have made extra returns in the near-term, however, America’s economy ultimately suffered.

Less than a decade ago, after years of dramatic deregulation coupled with revenue-draining tax cuts, the entire U.S. financial system effectively collapsed. It took down with it millions of American consumers, workers, small businesses, retirees and middle-class homeowners.

The country can’t afford this kind of outcome again. That’s why I want to be as straight as possible: Despite what you may believe, the Republican tax plan taking shape is a sham. It will lead to more pain and less prosperity for the vast majority of Americans. Investment professionals have a moral obligation and a personal interest in opposing the bill.

Stopping it will be good for investors’ bank accounts, because when Main Street and the rest of the nation does well, so does the financial sector. Trickle-down economics doesn’t work, but trickle-up does. Trying to re-enact Reaganomics under completely different circumstances may well lead the economy back into a recession—one that the country will be ill-equipped to weather after the GOP proposal adds $1 trillion to the national debt.

The plan’s massive tax cuts won’t reinvigorate the economy. For years corporations have enjoyed historically high profits, but investment hasn’t increased alongside them. Last month at a meeting of The Wall Street Journal’s CEO Council, an editor asked attendees whether they would boost investment if the tax bill passed. Few hands went up.

Neither will it juice consumer spending. Sixty-two percent of the benefits from the Senate bill’s tax cuts flow to the top 1% of earners, according to an analysis by the Tax Policy Center. The true source of consumer power rests with the middle class, yet this report shows that nearly half of American families would ultimately see their taxes rise under this plan. They would be left with less money to spend, not more.

Honest analyses indicate that the Republican proposal overwhelmingly helps the wealthy and is probably a net negative for almost everyone else. That’s largely because it will be paid for with money taken out of the pockets of working Americans and their children: The tax cuts will be used as an excuse to further gut investments in education, health care and training. Slashing these services for working Americans will stunt the country’s future prosperity and weaken the overall economy.

Congress should realize that the American people will not be fooled by the noise. If they see a bill passed that hands out filet mignon to the wealthy while leaving them struggling over scraps, they will be furious. Once again, they’ll realize that the system serves the needs of those at the top and ignores working families. They’ll consider this more evidence of corruption. And it will be harder than ever to argue otherwise.

For too long, those at the top of the economic ladder have refused to concede that opportunity in America is nothing like it used to be for working people. The pain caused in small towns when companies shipped their operations overseas has been ignored. The people who experienced globalization and automation as a huge threat have been forgotten. Too many families and communities have been treated as costs, or as commodities to be ruthlessly exploited.

It’s time to remember that America does not start and end on Wall Street. The country prospers when all Americans succeed together. That’s why we must address the growing inequality that is tugging at the seams of our society and destabilizing our politics. Passing this tax plan, which adds to workers’ pain, would put another knife into American democracy. It would be a true disaster. 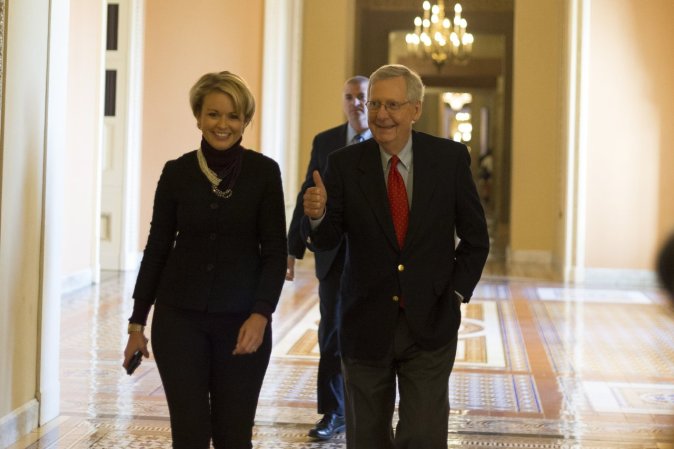 You have to ask yourself, how can this make sense? When 1 in 3 Americans say they are still struggling to recover from the Great Recession, is it worth saving the Trump family $1 billion by repealing the estate tax? Worth increasing insurance premiums for middle-class families in the individual market by $2,000, as the Center for American Progress estimates the Senate bill would? Worth taxing tuition waivers, making it prohibitively expensive for young people to get advanced degrees and thus sacrificing America’s economic competitiveness down the road? Worth cutting Medicare by $25 billion? Worth ending tax credits for clean energy, sabotaging one of the most promising industries for the 21st century, while protecting much larger tax breaks for oil and gas?

The rest of the country thinks Wall Street’s greed clouds its judgment. But I know that doesn’t have to be true. No matter where investors fall on the political spectrum, deep down, they know that when patriots put country ahead of self, everyone benefits. There’s still time to acknowledge the significant harm that this destructive tax plan will do to American society and then to oppose it. Let’s take the broad view.

Mr. Steyer is the founder and president of NextGen America and Need to Impeach.