Excerpted from The Big Squeeze: Tough Times for the American Worker, by Steven Greenhouse, a labor and workplace reporter for The New York Times (Knopf, 2008). Because of its length, this article will be presented in four parts.

In his job at a Wal-Mart in Texas, Mike Michell was responsible for catching shoplifters, and he was good at it, too, catching 180 in one two-year period.

But one afternoon things went wildly awry when he chased a thief — a woman using stolen checks — into the parking lot. She jumped into her car, and her accomplice gunned the accelerator, slamming the car into Michell and sending him to the hospital with a broken kneecap, a badly torn shoulder, and two herniated disks. Michell was so devoted to Wal-Mart that he somehow returned to work the next day, but a few weeks later he told his boss that he needed surgery on his knee. He was fired soon afterward, apparently as part of a strategy to dismiss workers whose injuries run up Wal-Mart’s workers’ comp bills.

Twenty-eight-year-old John Arnold works in the same Caterpillar factory in Illinois as his father, but under the plant’s two-tier contract, the maximum he can ever earn is $14.90 an hour, far less than the $25 earned by his father. Caterpillar, long a symbol of America’s industrial might, insists that it needs a lower wage tier to remain competitive. “A few people I work with are living at home with their parents,” Arnold said. “Some are even on food stamps.”

At a Koch Foods poultry plant in Tennessee, the managers were so intent on keeping the line running all out that Antonia Lopez Paz and the other workers who carved off chicken tenders were ordered not to go to the bathroom except during their lunch and coffee breaks. When one desperate woman asked permission to go, her supervisor took off his hard hat and said, “You can go to the bathroom in this.” Some women ended up soiling themselves.

Don Jensen anticipated a relaxing life of golf after retiring from his human resources post with Lucent Technologies in New Jersey, where he was in charge of recruiting graduates from Stanford, Cornell, MIT, and other top universities.

But when Lucent increased its retirees’ health insurance premiums to $8,280 a year, up from $180, Jensen was forced to abandon his retirement.

He took a job as a ten-dollar-an-hour bank teller.

As part of her software company’s last-lap sprint to get new products out the door, Myra Bronstein sometimes had to work twenty-four hours straight testing for bugs. She felt great loyalty to the Seattle-area company because its executives had repeatedly promised, “As long as we’re in business, you have a job.” But one Friday morning the company suddenly fired Bronstein and seventeen other quality assurance engineers. The engineers were told that if they wanted to receive severance pay, they had to agree to spend the next month training the workers from India who would be replacing them. 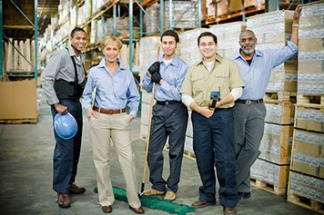 ONE OF THE LEAST EXAMINED but most important trends taking place in the United States today is the broad decline in the status and treatment of American workers — white-collar and blue-collar workers, middle-class and low-end workers — that began nearly three decades ago, gradually gathered momentum, and hit with full force soon after the turn of this century. A profound shift has left a broad swath of the American workforce on a lower plane than in decades past, with health coverage, pension benefits, job security, workloads, stress levels, and often wages growing worse for millions of workers.

That the American worker faces this squeeze in the early years of this century is particularly troubling because the squeeze has occurred while the economy, corporate profits, and worker productivity have all been growing robustly. In recent years, a disconcerting disconnect has emerged, with corporate profits soaring while workers’ wages stagnated.

The statistical evidence for this squeeze is as compelling as it is disturbing.

In 2005, median income for nonelderly households failed to increase for the fifth year in a row, after factoring in inflation. That is unprecedented in a time of economic growth. In 2006, median income for those households did finally rise, but it still remained lower — $2,375 lower — than six years earlier. That, too, is unprecedented. Even though corporate profits have doubled since recession gave way to economic expansion in November 2001, and even though employee productivity has risen more than 15 percent since then, the average wage for the typical American worker has inched up just 1 percent (after inflation). With the subprime mortgage crisis threatening to pull the economy into recession, some economists say this may be the first time in American history that the typical working household goes through an economic expansion without any increase in income whatsoever.

This, unfortunately, is the continuation of a long-term squeeze. Since 1979, hourly earnings for 80 percent of American workers (those in private-sector, nonsupervisory jobs) have risen by just 1 percent, after inflation. The average hourly wage was $17.71 at the end of 2007. For male workers, the average wage has actually slid by 5 percent since 1979. Worker productivity, meanwhile, has climbed 60 percent. If wages had kept pace with productivity, the average full-time worker would be earning $58,000 a year; $36,000 was the average in 2007. The nation’s economic pie is growing, but corporations by and large have not given their workers a bigger piece. The squeeze on the American worker has meant more poverty, more income inequality, more family tensions, more hours at work, more time away from the kids, more families without health insurance, more retirees with inadequate pensions, and more demands on government and taxpayers to provide housing assistance and health coverage. Twenty percent of families with children under six live below the poverty line, and 22 million full-time workers do not have health insurance. Largely as a result of the squeeze, the number of housing foreclosures and personal bankruptcies more than tripled in the quarter century after 1979. Economic studies show that income inequality in the United States is so great that it more closely resembles the inequality of a third world country than that of an advanced industrial nation. Many families are enjoying higher incomes, enabling them to buy a plasma-screen TV or take a vacation in Orlando, but this is frequently because fathers have taken on second jobs or more overtime hours or because mothers, even with toddlers, have opted for full-time paid employment. Millions of households have not slipped further behind only because Americans are working far harder than before. A husband and wife in the average middle-class household are, taken together, working 540 hours or three months more per year than such couples would have a quarter century ago, mainly because married women are working considerably longer hours than before. Viewed another way, the American worker’s financial squeeze has translated into a time squeeze. In a survey by the Families and Work Institute, two-thirds of employed parents responded that they didn’t have enough time with their kids, and just under two-thirds said they didn’t have enough time with their spouses. The typical American worker toils 1,804 hours a year, 135 hours more per year than the typical British worker, 240 hours more than the average French worker, and 370 hours (or nine full-time weeks) more than the average German worker. No one in the world’s advanced economies works more.